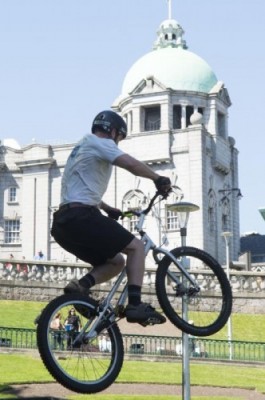 Two-wheeled stunt shows, a pedal powered cinema and cycle skills track are among the attractions on offer on Thursday (16 May) as Aberdeen city centre hosts a cycling spectacular to mark the latest visit of the OVO Energy Tour Series.

Elite riders will go head to head on a 1.3km circuit, with the women’s race starting at 5.30pm and the men in action from 7pm. Thousands lined the streets in 2017 and 2018 to watch the international field race – with a refreshed route for 2019 promising to deliver another fast-paced evening of top level competition.

The series is televised worldwide and this year will have new landmarks as a backdrop, with Marischal College and the Town House featuring on the route.

The elite races are the climax of a fun filled programme which opens at noon and runs through to the 5.30pm start of the women’s race.

Four activity zones around the course will offer a range of hands-on activities as well as performances, with Scottish Cycling age group races featuring local riders also running from noon.

Marischal Square will house a face painter, the Tour Series merchandise stall as well as interactive cycle activities including the Sustrans pedal powered cinema, University of Aberdeen smoothie bike and also the Get About and Air Quality stalls.

Marischal College Quadrangle will become the Fast Traxx course, where a variety of bikes will be available for riders of all ages to test their skills. The All or Nothing Aerial Dance Theatre will also be staging shows at noon, 1pm, 2pm, 3pm and 4pm as well as offering taster sessions after each performance. Aberdeen Sports Village will be leading an exercise class at 12.15pm and then throughout the day, at quarter past every hour, parent and child activities.

At St Nicholas Street the Clan stunt show will feature head to head competition between two trial stars, with performances at 12.30pm, 2.30pm and 4.30pm.

On Union Bridge, visitors will also be able to tackle a bike obstacle course or try the climbing wall and around the route there will be walkabout street acts as well as Graham Benson’s demonstration on an array of bikes – including a penny farthing and unicycle display.

Councillor Marie Boulton, Aberdeen City Council’s culture spokesperson, said: “The OVO Energy Tour Series has created a fantastic atmosphere over the past two years and we’re looking forward to welcoming the teams and spectators on Thursday.

“The activity programme is designed to appeal to all ages and there’s always a great family feel to the event, which has really captured the imagination of local residents and visitors who travel in to the city centre from far and near. It will be a great celebration of cycling and we have enjoyed seeing the way the series has been embraced in the city as part of the Council’s ambitious Aberdeen 365 events strategy.

“The significant investment in bringing new and exciting attractions is transforming the cultural landscape in Aberdeen, with Thursday’s arrival of the Tour Series following on from the success of Nuart Aberdeen. The support of the public has been key to the success of the new events introduced in recent years and we thank everyone who has played a part.”