Aberdeen City Council is cutting back on its use of herbicides  by becoming the first local authority in the UK to deploy a weedkiller which uses only water. 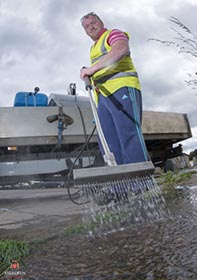 Environmental Services has invested in equipment which uses no chemicals but instead sprays hot water on to weeds and mosses to kill them organically.

The equipment also doubles up as an effective method of dealing with chewing gum and is being deployed on the streets of Aberdeen to remove the substance from pavement surfaces within seconds.

The 'Cardley-Wave' system was trialled in the city for a month, after council officials attended the company's launch event in March in Bristol, the European Green Capital City 2015. The system proved effective and one of devices was purchased, which s now being used as a 'green', chemical-free weed-killer on streets and in parks and play areas.

The equipment can also be used for high pressure jetting of hot water for deep cleaning of street furnishings as well as for drain clearance.

Cardley-Wave equipment used widely across Europe but Aberdeen City is the first council in the UK to adopt the system.

Communities, Housing and Infrastructure convener Councillor Neil Cooney said: "Protecting the environment is extremely important to the City Council and this excellent system allows us to get rid of weeds simply by dousing them with hot water. An added advantage is that we can also use it as a quick and efficient way to get rid of unsightly chewing gum and graffiti.

"More and more countries are banning the use of certain types of weedkillers so it makes sense for Aberdeen to stay ahead of the legislation and take the best environmentally-friendly course of action now available to control weed growth."

Cardley-Wave group marketing manager Josh Sweeney said: "Our range of systems are one of the most popular and proven environmentally-friendly methods of weed control in Europe, so it speaks volumes that the first council to try our system in the UK is also the first UK local authority to invest to purchase outright."

The Cardley-Wave basically comprises a pump and water heater. It is transported from site to site on the back of a truck, which also carries a large water tank. The water heater can be set to deliver either hot water or steam via a hose that can be fitted with a range of attachments to suit the task at hand. The water contains no additives.

Weeds can be soaked up to three times over a period of time to totally kill the toughest varieties but smaller weeds can be seen wilting after one treatment.

The method is in line with a European Union directive which states that countries must keep herbicide and pesticides usage to levels which "reduce or minimise the risks to human health or the environment."