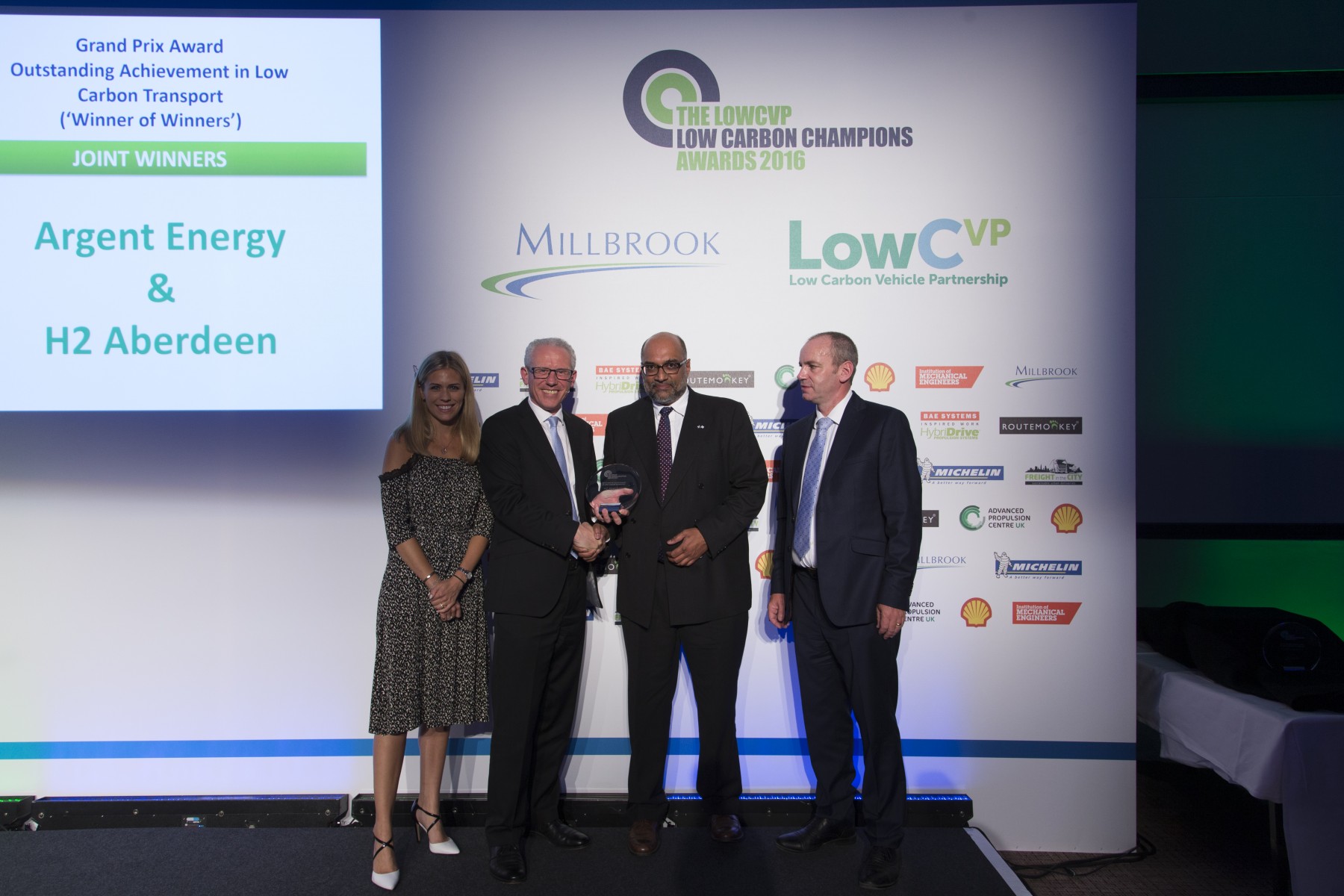 The H2 Aberdeen initiative, which has developed a strategy for the introduction of cleaner, hydrogen-powered transport, achieved the Grand Prix Award: Outstanding Achievement in Low Carbon Transport, and also the Low Carbon Road Transport Initiative of the Year at the annual Low Carbon Champions awards.

H2 Aberdeen brings together a strategy and series of projects to create a cleaner transport system in the city, and will cut emissions from public transport, the council fleet and other vehicles through the introduction and operation of hydrogen fuel cell electric buses, vans and cars.

H2 Aberdeen has introduced Europe’s largest fleet of hydrogen fuel cell buses, as well as the UK’s largest hydrogen production and bus refuelling station provided by BOC. The bus companies using the technology – First and Stagecoach - report that the vehicles are proving to be extremely efficient compared to their diesel equivalents.

“The project was identified as helping to promote technology and jobs in an energy sector alternative to oil and gas, and with European Union funding secured, it has been due to the hard work by City Council staff and the partners which has made it a good solid project – it’s the first step in making Aberdeen a leading city in demonstrating and developing H2 and fuel cell technologies.

“The partnership approach has ensured that the experience and learning shared between project partners to further enhance next generation vehicles in the hydrogen sector.

“The result is a success story which has seen this green fleet travel the equivalent distance of 10 times around the world, reducing carbon emissions in the city and introducing the travelling public to a new, environmentally friendly form of public transport.”

The H2 buses produce no harmful emissions as the only output is water vapour and it is estimated that over the four years of the project lifetime, the buses will save more than 1,000 tonnes of carbon emissions – helping the city be a smarter and better place for everyone.

The LowCVP Managing Director Andy Eastlake said about the Awards: “All the entries short-listed for the Champions Awards deserve recognition for the contribution they are making to cutting carbon emissions from road transport.

“There is a lot of work still to be done to achieve the long-term objectives set under the Climate Change Act, but the dynamism and determination shown by so many of those involved today shows how UK industry and operators have the drive and potential to achieve them.”

The Champions Awards judging panel was comprised of 22 senior executives from across a range of UK organisations with a stake in the low carbon road transport agenda.

Darren Messem, Chairman of the LowCVP and an Awards Judge, said: “The UK vehicle industry continues to push the boundaries of innovation in low carbon technology, production and operation. This is essential to deliver the decarbonisation of transport needed to mitigate the worst effects of climate change and to improve air quality.

“This year’s LowCVP Champions Awards recognise innovation across the transport sector, and all stakeholders in the LowCVP – the Board, the Secretariat and our members - hope this provides further stimulus to all the innovators and operators working hard to deliver low carbon transport.”