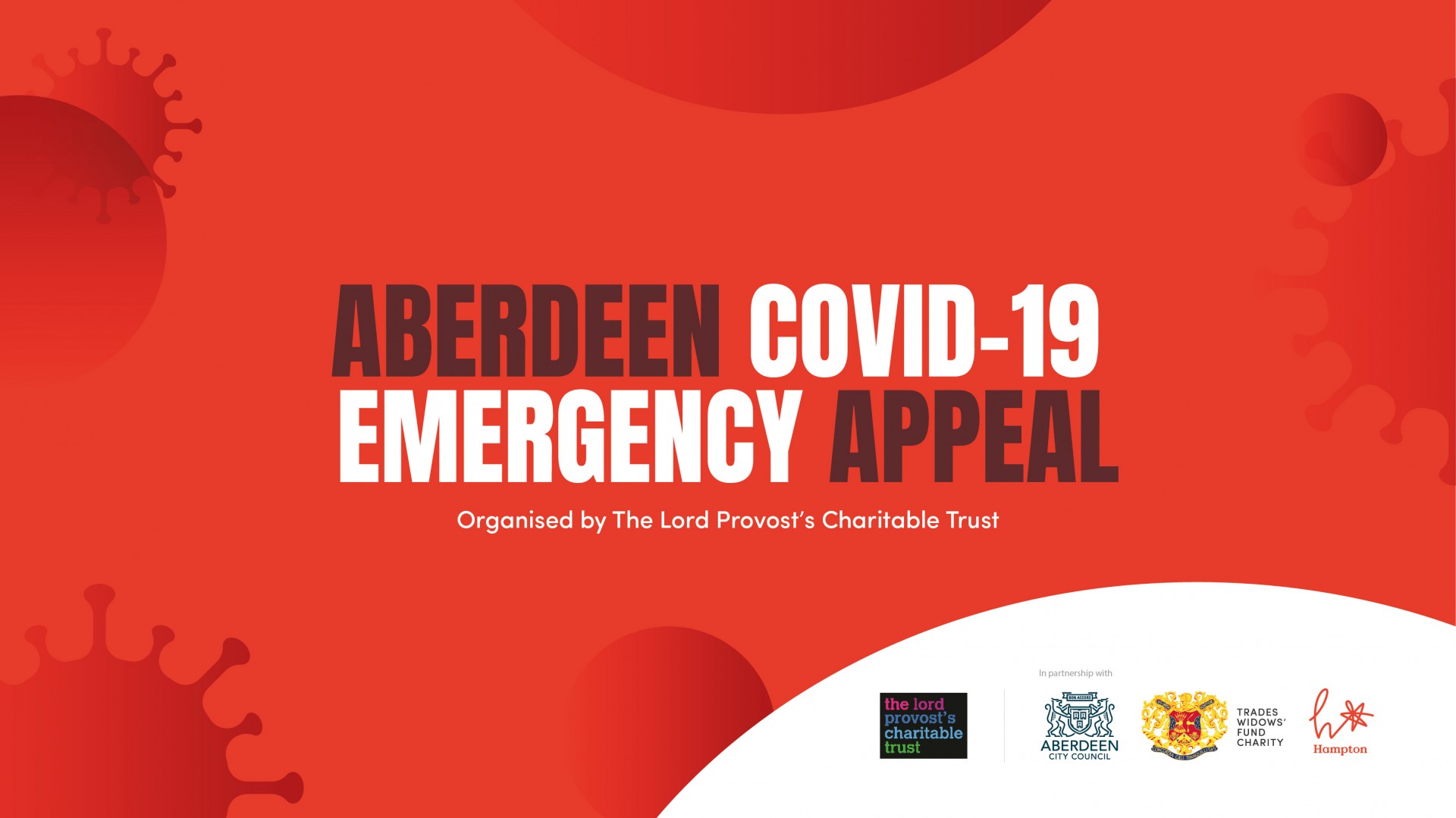 The Lord Provost’s Charitable Trust Aberdeen Covid-19 crowdfunding appeal has raised almost £240,000 in less than a month, thanks to another staggering £50,000 donation from The Seven Incorporated Trades Widows’ Fund Charity, it was revealed today (Monday 01 June 2020).

It is the second donation of £50,000 from The Seven Incorporated Trades Widows’ Fund Charity and match funds the £100,000 donated by Aberdeen City Council via the Common Good Fund.

The hardship fund was created following a request to the Lord Provost of Aberdeen Barney Crockett, from The Seven Incorporated Trades of Aberdeen and a local businessman, for the Charitable Trust, to be used as a vehicle to create a hardship fund for those impacted by the COVID-19 pandemic.

The Lord Provost of Aberdeen, Barney Crockett said: “The hardship fund was kicked off by The Seven Incorporated Trades Widows’ Fund Charity wonderful donation of £50,000, which encouraged others to donate to this very worthy cause. For the Widows’ Fund to donate a further £50,000 is simply amazing.

It is thanks to them and the generosity of individuals and businesses that we have been able to give much needed financial support to local charities helping local people in desperate need due to the Covid-19 pandemic. This second sizable donation will enable the hardship fund to help many more local people. It’s marvellous.”

Mervyn Donald, Deacon Convenor, The Seven Incorporated Trades of Aberdeen said: "We are delighted that we are in a position to donate a further £50,000 to the Aberdeen Covid-19 hardship fund and to support these amazing charities who have been working tirelessly throughout lockdown.

"We are also very thankful to those who have generously donated to the fund over the past month, without these donations we could not reach as many families and individuals as we have and will continue to. We are grateful that we can see first-hand, the charities that are benefiting from these donations and changing the lives of local Aberdeen citizens who are struggling during the pandemic.”

In the first round of funding grants ranged from £2,000 to £35,000 with all money going directly to supporting individuals and families by providing food, nappies, clothing, toiletries, energy costs, equipment for clients, or small hardship payments. Among those who received support were vulnerable and at-risk groups including people experiencing poverty or ill health, people with disabilities, ethnic minorities, unemployed people, children and young persons, older people and others affected by the pandemic.

The Lord Provost and the Deacon Convenor visited AberNecessities, one of the 24 charities that received money in the first round of funding allocation, to see first-hand how the hardship fund is helping the charity support underprivileged families.

Michelle Herd, Co-Founder & Chief Operating Officer, AberNecessities said: “It was such a privilege for the Lord Provost and the Deacon Convenor to visit us. For them to see where the funds are being directly spent made us very proud. This week we had an incredible increase in the number of applications providing support to women and children fleeing domestic abuse. Most, with only the clothes on their backs. Having been granted this money we can provide essentials quickly and ensure #nochildshouldgowithout.”

It was estimated that the first round of funding supported approximately 3,640 individuals and 630 families with over 5,000 food parcels and 20,000 meals being provided.

Donations are still being sought and a special crowdfunding page on www.aberdeencovid19.org allows anyone anywhere to donate to this worthy cause.

Any organisation or individual wishing to discuss making a sizable donation can email lordprovost@aberdeencity.gov.uk marking it for the attention of Garry Watson, Clerk to The Lord Provost’s Charitable Trust.

100% of all donations received will go directly to helping those experiencing genuine hardship in Aberdeen due to COVID-19.

The closing date for the second round of applications was Friday 29 May and the Lord Provost’s Charitable Trust will meet early June to review the latest submissions.

The third round of funding in now open for new applications. Charities that wish to make an application for funding should go to https://www.aberdeencovid19.org/apply for further information and advice.

The special hardship fund is a partnership between The Lord Provost’s Charitable Trust, The Seven Incorporated Trades of Aberdeen and Aberdeen City Council.