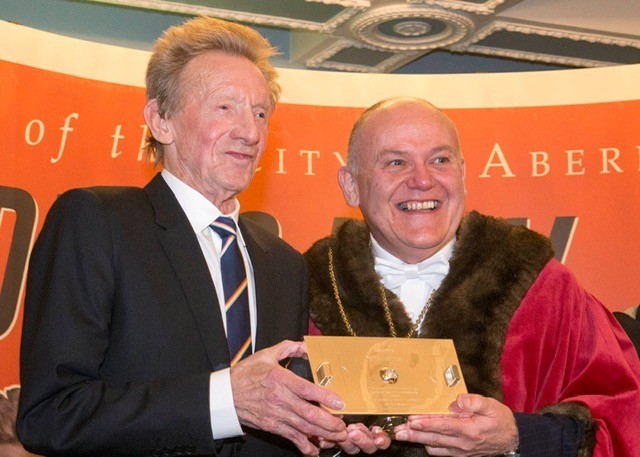 Aberdeen City Councillors today (Wednesday 3 March) voted in favour of the authority looking into the possibility of creating a bronze statue of football legend Denis Law for the city centre.

It followed a motion at today’s full council meeting by the Lord Provost of Aberdeen Barney Crockett that the City Council “should approach the Denis Law Legacy Trust with a view to enabling a bronze statue of Denis Law to be sited outside/near the vicinity of Provost Skene’s House, in the heart of the city.”

It was agreed that council officers should report back on the feasibility and costs of erecting a statue of the former Manchester United, Manchester City and Scotland great at the site.

The motion also noted the significant investment in Provost Skene’s House, which is currently undergoing a £3.8million refurbishment and the plan for there to be a Hall of Heroes dedicated to individuals who have contributed to the success of Aberdeen throughout the world.

Aberdeen-born singer Annie Lennox and former Aberdeen FC manager Sir Alex Ferguson are among others to be featured in the Hall of Heroes.

The Lord Provost said: “Denis is one of the city’s best-loved heroes, he has done a tremendous amount of work for people in Aberdeen and, if anything, his influence is even stronger today than when he was at the peak of his football career.

“It would be fitting if a statue is situated at the heart of his home city as he will also greatly in the new Hall for Heroes which is being created at Provost Skene’s House.

“Denis has always been and continues to be a terrific ambassador for Aberdeen.

“When Denis received the Freedom of the City in November 2017 thousands lined the streets to see him and I am certain that thousands would enjoy coming into the city centre to view a bronze statue of the Lawman.”

The cost and feasibility report will go to the next meeting of the City Growth and Resources Committee.