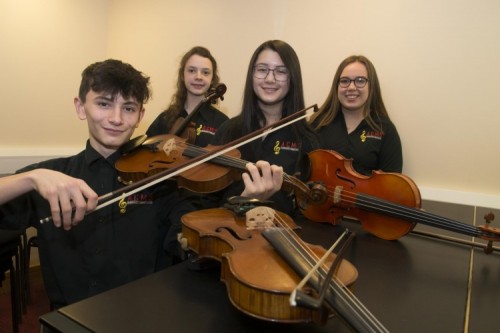 Four pupils at Aberdeen City Music School are to play at the prestigious BBC Sports Personality of the Year event dinner next month.

The awards, which have been a much-loved landmark in the UK’s sporting calendar since 1954 are making their Aberdeen debut at the new P&J Live venue on Sunday 15 December.

The school’s talented string ensemble, comprising students Ariana Black, William Hodi, Charlotte Slater and Sienna Lee, will entertain the corporate audience before they head into the main show with a 30-minute programme performed during the awards pre-dinner.

Sonia Scaife, Director of Aberdeen City Music School, said: “Ariana, Will, Charlotte and Sienna have been working hard preparing a programme of many genres and are all very excited, especially Will who is also a Scottish Schools’ athlete.

“It’s an absolute honour to be invited to perform at the dinner and it’s a great achievement for the school.“

The Aberdeen City Music School is based at Dyce Academy and is one of only four of its kind in Scotland. Places are free and pupils receive top class tuition from tutors who travel to the school from all over Scotland.

This year alone, the school celebrated a total of 19 distinctions in the Associated Board of the Royal Schools of Music (ABRSM) and Trinity exams while four pupils were offered places in the Performance and Scottish Traditional courses at the Royal Conservatoire of Scotland.

Details on applying to Aberdeen City Music School can be obtained by contacting Sonia Scaife at sscaife@aberdeencity.gov.uk