The principles outlined in a presentation from independent consultants BDP on the Aberdeen City Centre Masterplan were unanimously accepted  with further details on the delivery programme mechanisms to be decided at the next council meeting in August. 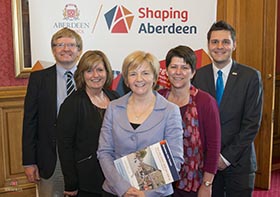 Aberdeen City Council appointed a multi-disciplinary team headed by internationally renowned masterplanning consultancy BDP to work with the public, businesses and a range of stakeholder organisations to draw up the City Centre Masterplan and Delivery Programme.

A full list of the proposals is available on the Aberdeen City Council website at City Centre Masterplan.

Council Leader and Leader of the Labour Group Councillor Jenny Laing said: "These proposals once delivered will have a significant and positive impact on our city. With the potential for an extra 5,500 jobs and an increase of £280million in the city's gross annual income it is an opportunity that all councillors have today seized.

"We now have to focus on the delivery programme for each of the projects and of course we will need to work with all our partners to secure the funding necessary to change our city for the better and to help build a city that attracts visitors and investors from across the globe."

Independent Group Leader and C hair of the City Centre Masterplan Working Group Councillor Marie Boulton said: "Leading the Masterplan working group has been an honour. With representatives from all the groups on the council and a good range of stakeholders we were able to agree that a long-term city vision was needed.

"The public were clear that they wanted a strong city centre events programme which also sought to provide a cultural focus for the city."

Conservative Group Leader Councillor Ross Thomson said: "We now have an ambitious and bold plan that ensures that city centre regeneration is not just talked about but actually delivered.

"Today we have finally agreed a framework that enables change, encourages regeneration, transforms the city centre and repairs its broken heart. We can now move forward with the full backing of all councillors, of our universities, and of our business community."

SNP Group Leader Councillor Jackie Dunbar said: "We all share the goal of improving our city centre and I am pleased to support the proposals presented to us by Independent Masterplanning consultants BDP. 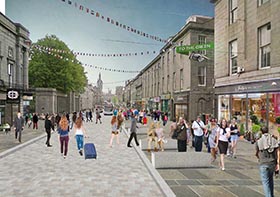 "Their suggestions follow extensive public consultation which identified that the public were hungry for change. There is still a great deal to do and each project still needs to be discussed further on its individual merits."

Liberal Democrat Group Leader Councillor Ian Yuill said: "The proposals will deliver positive benefits accessible to residents across the city and include more and improved public space from Union Street to Castlegate to Union Terrace Gardens.

"On top of that an additional 1600 homes could be created in the city centre that will help maintain it as a thriving and economically viable place to live and work."

The next council meeting will take place on 19th August 2015.

1.  The key proposals identified by BDP following public consultation include:

2.  Feedback from those living and working in Aberdeen helped shape the evolving Masterplan and the specific projects included the following:

  Queen Square: The transformation of the Queen Street area into a new mixed-use urban quarter;
  Castlegate/Castlehill: A vibrant public square will reinvigorate Castlegate/Castlehill;
  Denburn Valley: The reawakening of the Denburn Valley as the setting for a new generation of city living;
  Heart of the City: Union Street gets the space it deserves through pedestrianisation of part of Aberdeen's historic main street;
  Union Street West: A contemporary business/retail/leisure feel to the West End of Union Street and the renovation of Golden Square and Bon Accord Square as accessible green spaces;
  Station Gateway: A much enhanced gateway and better pedestrian routes to and from the railway station to radically improve first impressions of Aberdeen;
  South Dee: A new pedestrian bridge across the Dee to link to a new residential community at South Dee and enhanced riverside promenade;
  North Dee: A significant new office and business quarter at North Dee

3.  Following an extensive period of public and stakeholder engagement in which more than 4000 people living and working in Aberdeen were involved BDP, identified 49 projects across four City Centre Masterplan themes to be presented to the Full Council meeting on June 24th.

4.  The projects include 12 community based initiatives, 13 infrastructure proposals, 13 economic outputs and 11 environmental developments across the city. Key housing, building, transportation and public realm concerns raised during the consultation process have been addressed as the city gears up for the next 25 years and beyond.