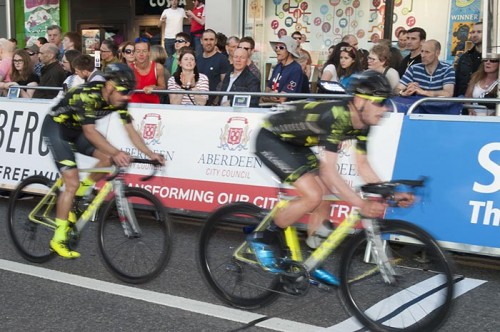 The impact of three new major events has been underlined as Aberdeen City Council moves forward with ambitious plans for the 2018/19 programme.

The Nuart Aberdeen street art festival, Great Aberdeen Run and introduction of Tour Series cycling during the course of this year provided a significant boost to the regional economy and attracted tens of thousands of visitors.

All three were at the heart of a report considered by members of the Finance, Policy and Resources committee yesterday (6 December 2017) as members agreed to support their return next year as part of the wide-ranging Aberdeen 365 events strategy.

Cllr Douglas Lumsden, Aberdeen City Council Co-Leader and convener of the Finance, Policy and Resources committee, said: “Our role as a council is to drive the growth of the city’s economy and events represent a major part of our ambitions. It is vital we attract footfall to Aberdeen, both from local residents and from visitors from further afield.

“Diversification and internationalisation are key strands of the regional economic strategy. Tourism can support both of those aims and in order to appeal to a wider audience it is vital Aberdeen establishes itself as a truly world class destination. Great strides have been made and we will continue to push forward by investing in an events programme which is already attracting interest throughout Britain and the world.

“Nuart Aberdeen was a huge success whilst the Great Aberdeen Run and the Tour Series had local, national and international appeal. When you add to the mix the more established events, such as SPECTRA and the Aberdeen Christmas Village, there is a very compelling offer to residents and visitors alike.

“The Aberdeen 365 strategy supports the cultural needs of the city but also the business needs, with increased footfall and the required support to host these major events helping to boost local companies across a variety of sectors.”