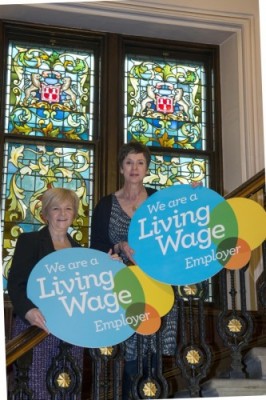 Aberdeen City Council has today (7 November 2017) been officially recognised for its commitment to the Living Wage.

The Council has been presented with Scottish Living Wage accreditation after being assessed against criteria set by the Poverty Alliance.

Cllr Jenny Laing, Co-Leader of Aberdeen City Council, accepted the award and highlighted the important role the authority has to play.

She said: “Living Wage accreditation demonstrates the positive steps we have taken as one of the region’s largest employers. It is essential Aberdeen City Council and other public sector bodies lead by example and encourage more employers, including in the private sector, to follow suit.

“Achieving Living Wage accreditation is an important milestone, but it should not be considered the end of a process for the Council. We will continue to work to respond to the needs of our workforce.

“As an organisation we have been very clear about the financial pressures we face and the way in which we operate will change significantly in the months and years ahead. What must remain constant is the organisation’s duty of care to its employees.”

Peter Kelly, director of the Poverty Alliance, said: “I would like to congratulate Aberdeen City Council on their accreditation as a Living Wage employer and the commitment to tackling in-work poverty. I hope that other employers in Aberdeen will also consider joining the growing number of Scottish employers recognised for paying a real Living Wage.

“With more than half of children in poverty in Scotland living in a household where someone works, paying a real Living Wage that reflects the cost of living has never been more important.”

Aberdeen City Council agreed Earlier this year to increase the pre-parity rate for all framework agency workers to at least the 2016/17 Living Wage figure of £8.45. Following the agreement of the national pay award for local government employees the minimum hourly rate paid to employees of the Council, excluding apprentices, has been £8.51 since 1 April 2017.