An Aberdeen City Council cook has been named the best in Scotland.

Earlier this month Lynn Ellington represented Aberdeen City Council at the Scottish School Cook of The Year national finals staged at the prestigious ‘Cook School Scotland’ in Crosshouse, near Kilmarnock.

Lynne, who is the Cook in Charge at Northfield Academy, created two dishes during the competition including taco baskets filled with chilli on a bed of fresh salad and guacamole, and Cranachan cupcakes.

The panel of judges, which included Gary McLean from Master Chef, were looking for tasty nutritional meals that could be made for a total of £1.60 per meal. Lynn was announced as first place winner at a Gala Dinner which took place in Glasgow on 24 August. 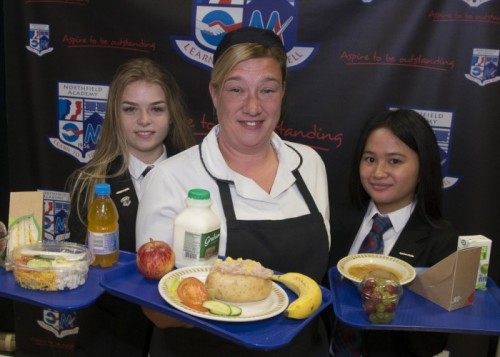 Lynn Ellington said: “This is a great honour not only for me personally, but for all of the cooks and catering staff at Aberdeen City Council who work hard to provide the best and most nutritious meals for pupils and staff in all our schools and, offices.

“Whilst winning an award like this helps us realise we are appreciated for what we do, it really is the ‘icing on the cake’, the real satisfaction we get is from the contribution we are making to supporting children and young people in the early years of their learning and formation.”

The competition aims to raise the profile of the school meals sector in Scotland and to highlight the skills of those who are working hard on the front line of service delivery on a daily basis.

Aberdeen City Council Communities, Housing and Infrastructure convener Councillor Yvonne Allan said: “I congratulate Lynn and the rest of the catering team on their hard work and this excellent achievement.

“This accolade is yet another example of the enthusiasm our catering staff has toward providing delicious, healthy meals within our schools having become the first team in Scotland to achieve silver ‘Food for Life Served Here’ accreditation for the healthy meals they serve in primary and schools earlier this year.”

Aberdeen City Council previously took part in the Scottish School Cook of the Year competition in 2015 and came third.