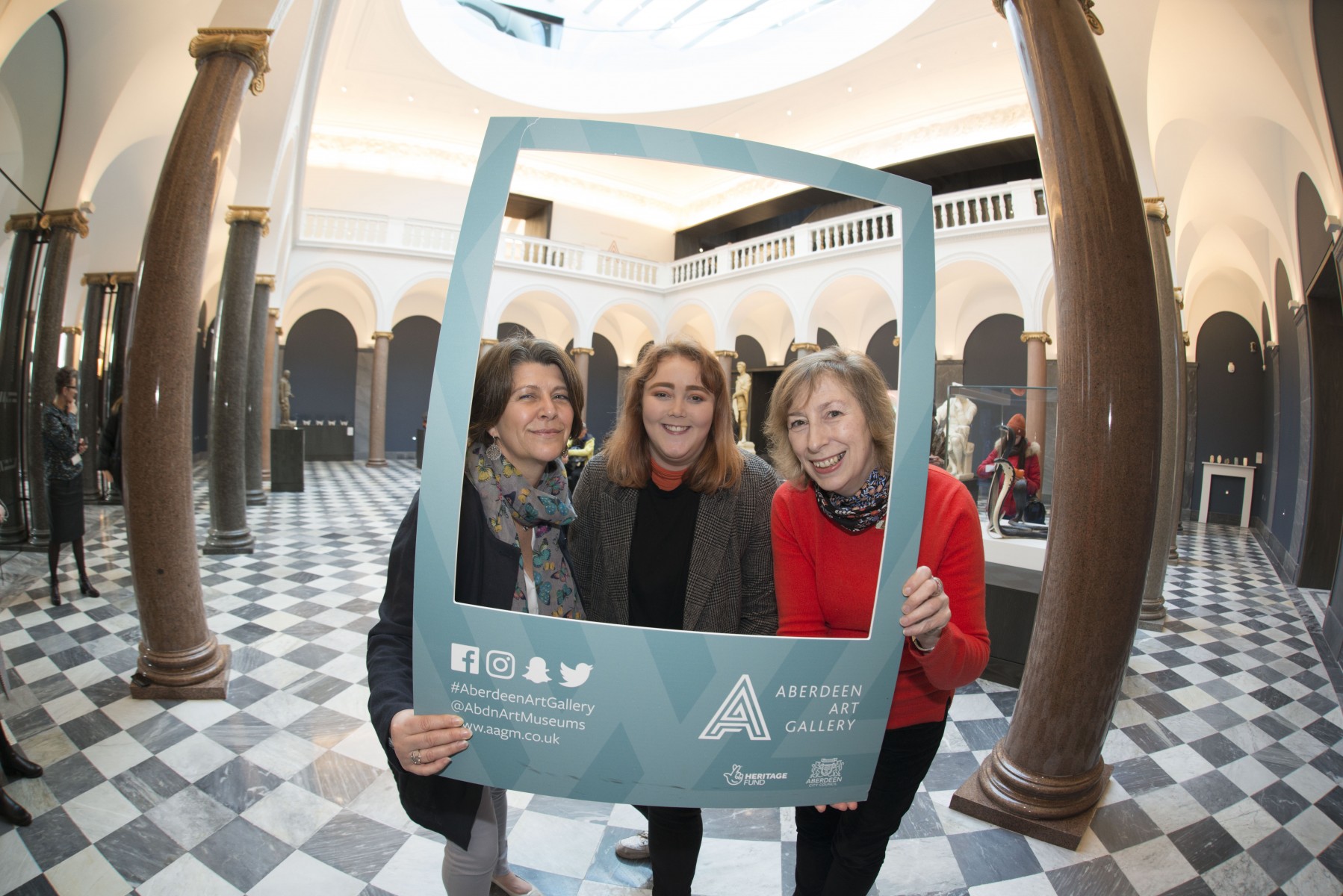 Aberdeen Art Gallery has welcomed more than 100,000 visitors since it re-opened to the public less than 100 days ago. The revitalised Gallery is now well on its way to reaching the target of 235,000 visits in its first year.

The milestone 100,000th visitor was 20 year-old, final year journalism student at RGU, Ceilidh Jeffrey who arrived at the revamped gallery around 11.30am on Tuesday (28 January) almost a fortnight ahead of the landmark 100 days since its reopening on 2 November 2019.

Ceilidh, who received a commemorative goody bag to mark the occasion, was thrilled at the unexpected outcome of her visit. She said: “It was great, especially on my first time in the gallery. I thought at first I was being called over as I’d done something wrong as soon as I’d walked in so it was fantastic to find out I was the 100,000th visitor!

“We had our first class back after the Christmas break and had been talking about going – my friend Rhiannon who’s from Aberdeen had been going to the gallery since she was little and went to the first night of the reopening and had been telling us all how great it was so we were excited about going.”

Ceilidh, who is originally from Glasgow, added she’s really impressed with the gallery: “It’s very modern but with an old-fashioned twist. It’s really big and is definitely somewhere you can go with pals and go by yourself and see something new every time.”.

The Art Gallery which re-opened following a £34.6m redevelopment, enjoyed a high-profile launch included a ‘real-life critics’ slot on BBC’s The One Show, a live broadcast from the new Level 2 Terraces with the Met Office’s Matt Taylor for BBC Breakfast, and a mention in Travel Zoo’s ’20 best places to travel in 2020’.

The Gallery has quickly re-established itself as a major draw for local people and visitors to the city. Councillor Marie Boulton, Aberdeen City Council’s culture spokesperson, said: “The redevelopment of Aberdeen Art Gallery has created a world-class visitor attraction. The re-opening of the Gallery, together with the refurbishment of the Music Hall and the opening of P&J Live, has re-energised our city and reminded us all of the tremendous cultural assets we have here.

“Aberdeen Art Gallery’s nationally-recognised collections and the fantastic programme of exhibitions coming up – including Zandra Rhodes: 50 Years of Fabulous this summer – will continue to be a huge draw for local, national and international visitors, developing the city as an vibrant tourism destination and supporting the delivery of our Regional Economic Strategy.”

Jo Robinson, VisitScotland Regional Director, said: “The Gallery has been a huge success since its opening in November and I am delighted, though unsurprised, to hear it has already attracted 100,000 visitors. It is so important that we create world-class experiences, events and attractions to keep up with the ever-changing visitor demands. The Gallery is already proving a great draw for our visitors as there is something for every age group to enjoy, with frequently-changing exhibitions, speakers and events.

“With VisitScotland Expo - Scotland’s biggest business-to-business travel event - also coming to Aberdeen’s purpose-built P&J Live in April, the city really is being showcased to the world.”

Caroline Clark, Director Scotland of The National Lottery Heritage Fund, said: “When we took the decision to support the transformation of Aberdeen Art Gallery & Museum, we recognised the need for a world-class cultural centre for the north-east of Scotland. Not for a minute did we imagine it would reach this incredible milestone quite so soon. It is a real testimony to the thirst people have for exploring and celebrating their heritage and a fitting reward for all who have contributed to the project’s success”.

The redevelopment project has delivered investment in the fabric of the Grade-A-listed buildings including a re-imagined Remembrance Hall, refurbished Cowdray Hall, new exhibition and collection display galleries, improved visitor facilities and an enhanced activity programme. The 130-year old building and its streetscape have been re-designed to meet the needs of all visitors, underlining the ambition to create the people’s gallery. The project’s major principal funders are Aberdeen City Council and the National Lottery Heritage Fund.

Aberdeen Art Gallery is home to one of the finest collections in the UK, including works by important Scottish artists, designers and makers such as Henry Raeburn, Joan Eardley, Samuel Peploe, Rachel McLean, Bill Gibb and James Cromar Watt, as well as nationally and internationally-acclaimed artists including Barbara Hepworth, Francis Bacon, Tracey Emin and Claude Monet.