Aberdeen City Council has launched the 2015 Aberdeen In Bloom Garden Competition  which is celebrating its 40th anniversary. 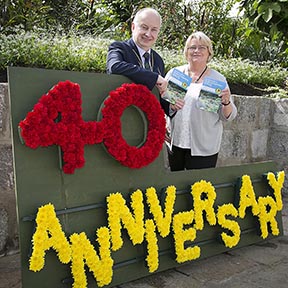 The competition rewards the residents of Aberdeen for their contribution to the city's overall floral display and involvement with national Bloom Competitions and it has proved to be a hugely popular event over the years attracting thousands of entries from residents, schools, businesses and community groups.

A special award will be given this year for individuals who have contributed to Aberdeen In Bloom and in particular, the Garden Competition over the years.

She said: "The competition has been extremely popular and is a testament to our residents how many high quality entries there has been year after year.

"The beautiful displays created by our residents, ranging from window box containers to small front lawns to extensive back gardens, have helped to ensure Aberdeen has been a constant winner in various national In Bloom competitions over the years.

"It is great the competition has built up in over the years and is a hotly-contested fixture in the city's gardening calendar, and we would encourage people to enter it or persuade their family, friends or neighbours to sign up.

"We look forward to seeing what people will have for our judges to look at this year, particularly since it's the 40th anniversary of the competition."

Aberdeen Lord Provost George Adam, who launched the Garden Competition at a special event at Duthie Park today, said: "Gardening helps to keep you fit and healthy and it does make our city look better through the collective efforts of our residents.

"We want to celebrate these beautiful gardens and we look forward to seeing the final results."

Participants put in a great deal of work and effort which has contributed to making the city a world leader in horticultural excellence, a prominence in community participation and a significant front-runner in environmental responsibility.

In 2013, a new category of School Gardens was introduced, which is open to schools which have developed an area, providing a horticultural display which adds educational value to the pupils and to the social improvement of the school. This category has proved to be a very successful one and attracts numerous entries. It also teaches the children to learn about the environment through the growing of fruit and vegetables which will hopefully go someway to producing future gardeners.

The Garden Competition Entry Forms will be posted to past and new entrants and will also be available at local libraries and community centres throughout the city.

During the judging of the nine categories, entries will be assessed from various criteria which include: floral displays, design and quality of horticultural features, standards of maintenance; sustainability, biodiversity initiatives, energy conservation, waste management, crop growing and wildlife encouragement.

Aberdeen City Council is grateful for the continual support and sponsorship received from the following companies: Balmoral Group Holdings Ltd, Country Ways, Michies The Chemists, Internet For Business, Ben Reid Garden Centre and Parkhill Garden Centre. Without their support the competition may not have reached this milestone.

The winners will be presented with their awards at a civic reception which will be held at the Beach Ballroom in September.