The second phase of a major council housing development in Aberdeen has been completed – with more than half the properties now occupied.

Fifty out of 80 homes have been delivered at the Manor Walk site in Heathryfold, representing another milestone in the Aberdeen City Council’s new-build programme for 2,000 new council homes.

The £13 million Manor Walk project, with properties ranging from one-bedroom flats to four-bedroom houses, is expected to be completed and fully occupied by autumn 2019.

Last year 99 council homes – 42 three and four-bedroom semi-detached properties and 57 one and two-bedroom flats – were provided at nearby Smithfield.

Council Co-Leader Councillor Douglas Lumsden said: “Our council house build programme is the biggest in half a century and we are continuing to upgrade existing stock.

“Providing decent, affordable homes is a central part of our economic growth strategy, allowing us to attract and retain key workers and making Aberdeen a city where all can prosper.”

The Council is poised to appoint a contractor to build 369 homes at the site of the former Summerhill Academy.

And there are plans for nearly 400 new council homes across Tillydrone, Kincorth and Craighill, with another 350 earmarked for Greenferns. 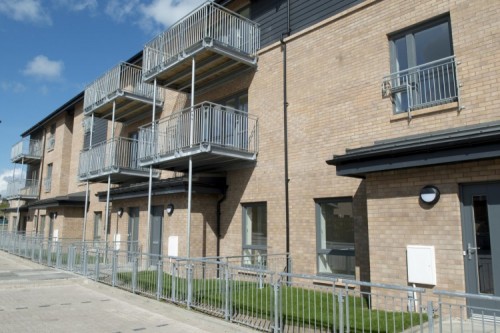 “We committed to increasing the supply of council housing and offering a range of tenancies because we want Aberdeen to be a city for everyone – youngsters starting out in their career, families, people moving towards retirement.

“In addition, we’re working with developers and land owners to significantly to improve the availability and quality of social housing in Aberdeen.”

The Manor Walk project is being delivered for the Council by Bancon Construction Ltd, which was appointed following a competitive tendering process.

Gavin Currie, Managing Director at Bancon Construction Ltd, said: “As a local contractor, Bancon is proud to work on this project with Aberdeen City Council and to deliver much needed council accommodation in Heathryfold.

“When completed, Manor Walk will offer a range of flexible accommodation and be an important new community in the city.”