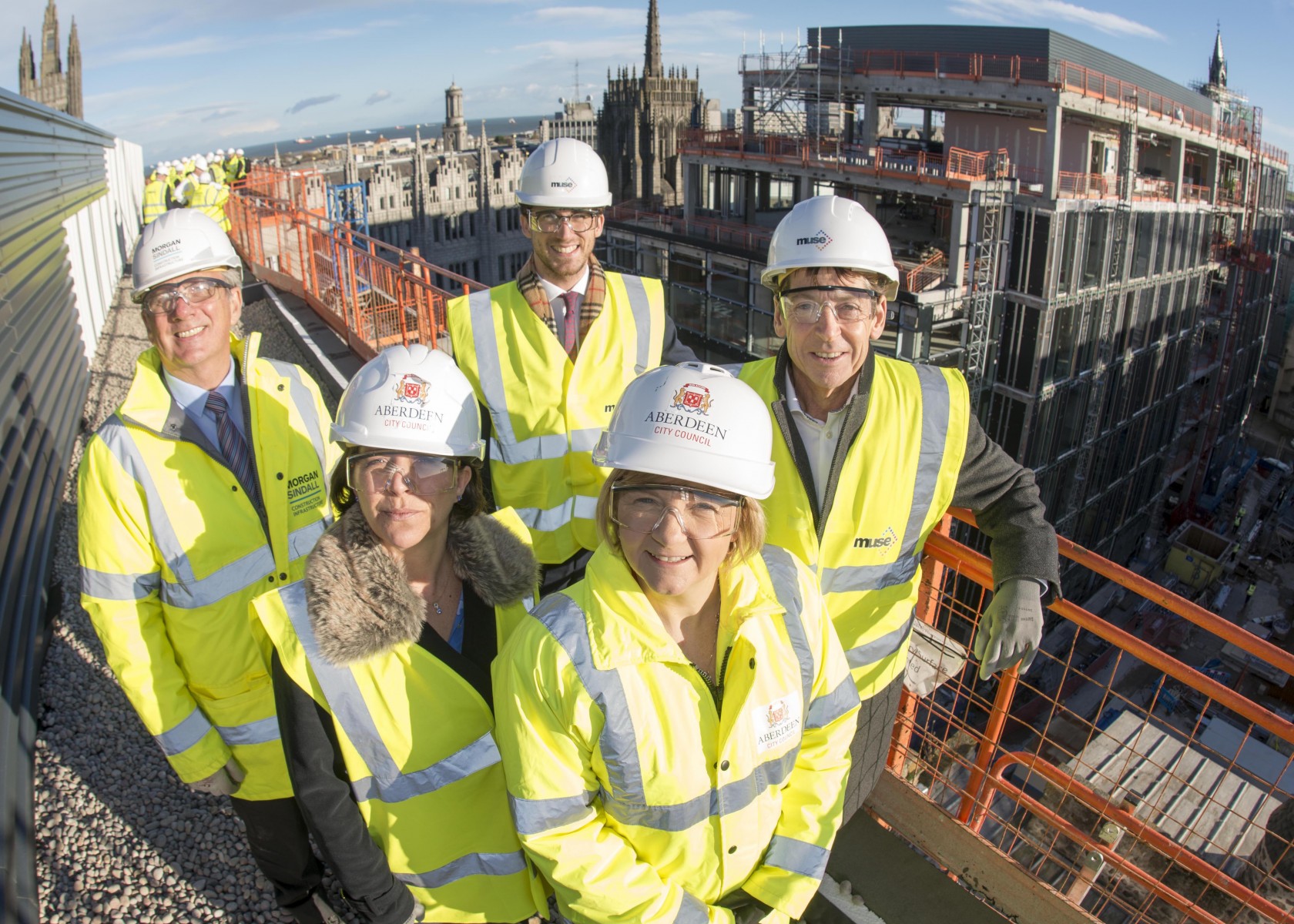 A topping out ceremony was held today for the £107million Marischal Square development which will help transform and revitalise the east end of Aberdeen city centre.

The prestigious project, which already has leading businesses signed up including Marriot International, All Bar One, Mackie’s and Prezzo, is on schedule for completion in July 2017. Aberdeen Journals is negotiating a lease for space at Marischal Square.

The development includes 14,500 sq ft of civic space in front of 16th century Provost Skene's House, a mixture of granite and glass in the elevations, two office buildings providing 173,500 sq ft of Grade A office space with secure parking, seven restaurants and café bars occupying the ground floor space, and a 126-room Residence Inn by Marriott.

It is being delivered by Muse Developments, which was appointed by site landowner Aberdeen City Council with Aviva Investors providing the funding, and will deliver an economic boost to the immediate area from enhanced footfall and more people working and using leisure facilities. It is also part of the 25-year City Centre Masterplan which is kick-starting a public and private sector regeneration.

Aberdeen City Council Leader Councillor Jenny Laing said: “I’m delighted the Marischal Square development is at the topping out stage as the project is a firm commitment to Aberdeen’s city-centre regeneration programme, the City Centre Masterplan.

“The development, and the leading businesses which have signed up so far, are testament to the confidence in the area and the strategic value the City Council places in our economy as we’re in an exciting phase of transforming the city.

“It is genuinely wonderful to see the City Council’s part in investing in the infrastructure of the city and the topping out will be a sign of even greater things to come as the Marischal Square development goes from strength to strength.”

Aberdeen City Council Deputy Leader Councillor Marie Boulton said: “It has been exciting to watch Marischal Square progressing in the last few months while at the same time seeing how Provost Skene’s House is being preserved.

“We look forward to the last part of the build and particularly to seeing how the civic space in the centre of the Square will look, with the contrast of the old with Provost Skene and the new glass-and-granite building.”

Muse Developments’ Regional Director, Scotland, Stephen Turner said he was delighted with progress on the project.

“This is another significant day for Marischal Square. This is a major city centre transformational project which fully supports the long-term ambitions for Aberdeen and delivers a vibrant new mixed-use development in keeping with the city’s justifiable position as one of the UK’s leading business destinations.

“The fact we have already attracted leading business including Aberdeen Journals, Marriott International, All Bar One, Mackie’s and Prezzo to Marischal Square is a testament to the new destination we are delivering in the heart of the city. Local businesses have also benefitted significantly through the support contracts associated with building a project of this scale.

“Marischal Square has the potential to make a long-term impact on the local economy, especially as it is vital the city has the right mix of office and commercial space to respond to the new challenges and opportunities it faces from the changes within the oil and gas sector.”

The main contractor for the project is Morgan Sindall.

Harry Thorburn, Managing Director – Scotland for Morgan Sindall, said: “We are delighted to be delivering this important project on behalf of Aberdeen City Council and Muse Developments. In particular, I am very proud of the impact the project has had on the local economy with in excess of £20million of subcontracts being let to local organisations.”

A spokesman for Aviva Investors said: “Aberdeen has a long standing reputation as one of the major business centres in the UK, and therefore developments like Marischal Square play a key role in ensuring the city maintains that position.

“We have been delighted to work closely with both Aberdeen City Council and Muse Developments on the project and believe it will make a considerable and positive long-term contribution to the local economy and community.”